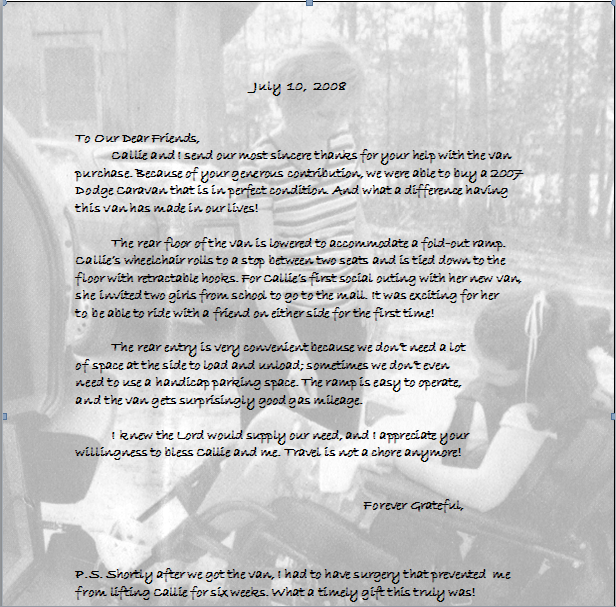 With vehicles costing $25,000 – $70,000 and up (depending on features) Pam, who was a single parent at the time, knew she needed to raise money, but she felt uncomfortable asking for help.  When Pam’s cousin offered assistance to launch a fundraising campaign, Pam was hopeful.  The two worked together to develop an informational brochure for anyone interested in learning more about the family.  Pam’s cousin contacted the pastor of the family’s church to see if the church would be willing to partner in the fundraising effort.  As a result of that conversation, the church created a fund for receiving donations and helped to spread the word about the family’s need.

While a good portion of the money raised was from contributions to the fund from the community, Pam also applied for several grants to help with the fundraising effort.  She received grant money from Fragile Kids Foundation, Jackson EMC Operation Round Up, and one other organization that is no longer in operation.  Within six months, she received enough donations to purchase a pre-owned van for $25,000.  Following the campaign Pam sent thank-you letters complete with pictures of her daughter and the van to all supporters.  Although the heartfelt letters explained the positive impact of having accessible transportation, the smiles on the faces of Mom and daughter truly said it all.

According to Pam, having the new van has been “life changing.”  Before the van she was uncomfortable traveling, but now she and her daughter go places because they want to, not just because they have to.  One month after purchasing the accessible van which has a manual fold-out ramp, Pam had surgery and was not able to lift Callie for 6 weeks.  Because of the van she was able to take care of herself during recovery and still take care of Callie’s transportation needs.  To this day, they couldn’t be happier or more grateful for the support they received.