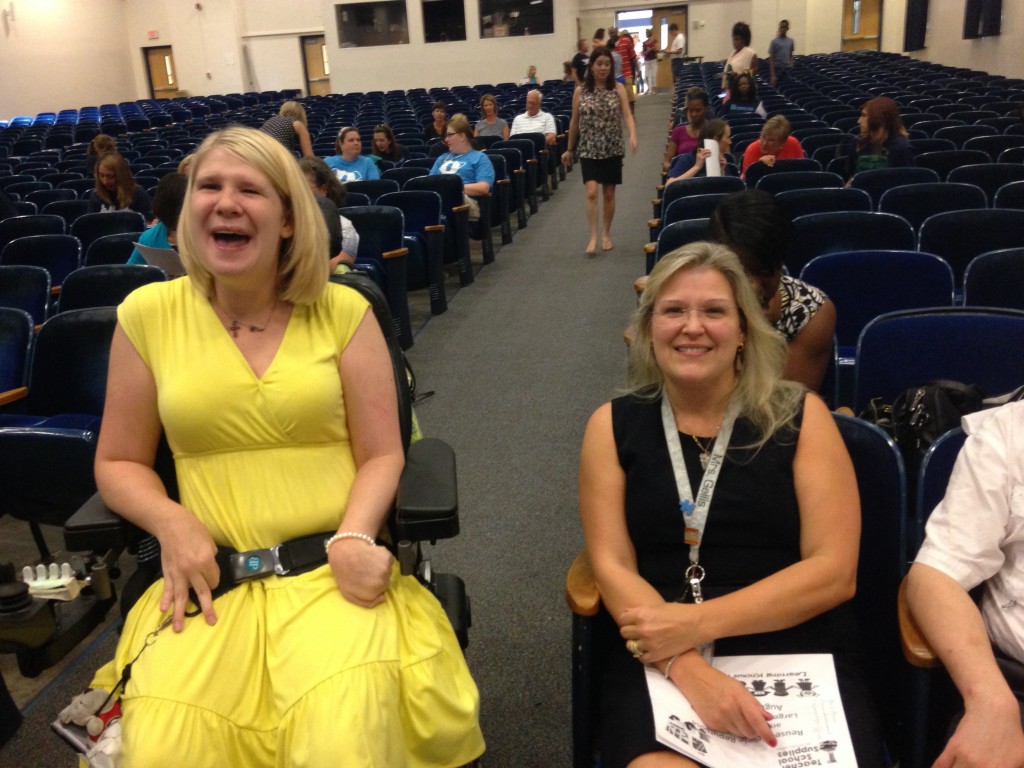 Last spring, I was incredibly fortunate to meet a panel of young people, known collectively as the AADD (All About Developmental Disabilities) Youth Ambassadors.  This group, ages 20 to 30, all have a developmental disability -but that does not define them by any means!  They are leaders, role models, public speakers and advocates for all people living with a disability. Working as the Parent Mentor for Marietta City Schools, I was enthralled and inspired by their stories and their ability to convey them with such clarity and passion.

As the school year came to a close, I offered to invite them to speak to our teachers at the Marietta City School, Department of Special Services Kick Off on July 31, 2015. Marietta City Schools is fortunate to have a talented and dedicated group of professionals working in special education.  I knew that if they could see and hear these young people speak, it would remind them of why their hard work, patience and perseverance matter.  All of our students will have a life after high school and it is our job to prepare them academically as well as emotionally for this transition that can be daunting for even the most accomplished student.

Kylie Moore, Brendan Jagielski and Eren Denburg Niederhoffer met me for lunch at a local restaurant beforehand. We had a great time catching up, talking about summer vacations, and really getting to know each other better.   Kylie is a graduate of Roswell High School and earned a BA in Psychology from Reinhardt University.  She works for AADD in Decatur and is the head of the Youth Ambassadors.  Brendan graduated from The Cottage School, attends Lanier Technical College and works for Sprouts in Johns Creek.  Eren graduated from Centennial High School, graduated from Marshall University and works in data mining for the Piedmont Group in Atlanta.

After lunch, we reconvened at Marietta Middle School for the presentation.  Led by Kylie, each ambassador spoke briefly about what it was like to be a student and what made a difference in their success.  Kylie, who has cerebral palsy, was the first speaker.  She introduced herself and then explained that she would be using her assistive technology to speak to us.  In an eloquent speech, she explained that despite her disability, she always took classes in the regular curriculum but was able to have extended time on tests as well as dictate her answers to her teachers.  She found great success in the fact that she was allowed to be herself and attend regular classes with her classmates.  The patience of her teachers and their willingness to allow her to participate fully was integral in her achievement and transition to college and work.  Her self-confidence is evident in her demeanor and her enthusiasm for her work and fellow ambassadors!

Brendan read a speech that he had prepared specifically for our teachers. Brendan is on the autism spectrum and has had many positive experiences in school that he was happy to share with us.   He touched on many points, but the underlying current was that there were teachers who helped him discover his love of learning in specific subjects.  He encouraged us to help students find subjects that   they love.  When you enjoy a subject, you will excel at it.  In high school, one of his favorite teachers sparked his love of history and now he is very much enjoying his Humanities class at college. He also spoke about having job support after graduation which helped him find the right fit for employment.   Going to college and working in a job he enjoys are only part of his accomplishments.  One of his proudest moments was when he was asked to give a speech at his high school graduation.  Public speaking comes easy for Brendan and it has truly allowed him to find his voice for advocacy.

Eren, our final speaker,  was nothing less than a powerhouse of an individual.  He spoke frankly about his struggles in school: about being the victim of bullying and making his first friend when he reached high school.  He also talked about the importance of having a mentor throughout a student’s school career.  Eren’s elementary school counselor became his greatest mentor.  As he explains it, she did not see his disability, which is autism.  She focused on his gifts.  For example, when he would lash out with an insult, she would commend him for his great use of vocabulary and his articulation.  She remained a mentor to him even through college.

He told our teachers that they are empowered to make a difference in the lives of these kids.  Their students are going through a lot of difficulties and being aware of it is not enough.  By being a friend, a mentor or just someone a child can talk to will be a tremendous building block in the future success of that individual.

The AADD Youth Ambassadors received a standing ovation.  In every sense of the word, this was a “Kick Off” for the upcoming school year.

These ambassadors gave life to the concept of this year’s DOE initiative: “Student Success: Imagine the Possibilities.”   To learn more about this, scroll down to the link: