From Struggle to Success 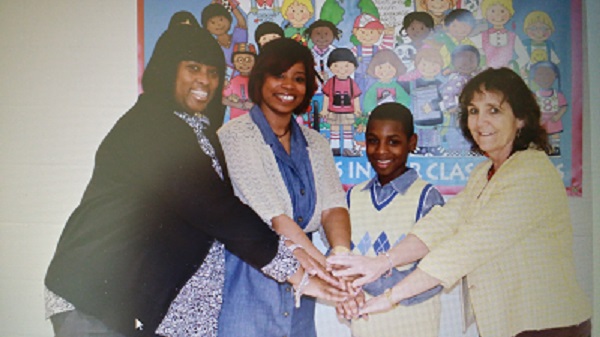 Editor’s Note:   This came from a 2014 conversation with then Richmond County Parent Mentor Saundra Kelly sharing her personal struggles with her son’s education. Although Kelly no longer works as a parent mentor, she wanted to share her story.

Kelly’s son is diagnosed with Aspergers. The events she is talking about here mainly took place during the 2012-13 school year. Her son has since moved up to middle school and she reports he has been having a much better year.

“Repeat after me….. School and Home Collaboration! This would be the only method of success… communicating, sharing, and embracing each other’s knowledge of my son, Noah.”  – Saundra Kelly

Part I Pain, Frustration and Fear

Q: You were getting calls about meltdowns frequently when your son was in elementary school… is that from day one? When did the real challenges with his behaviors at school become problematic?

A: Yes, I have always received calls about Noah’s elevated behaviors.  The behaviors initially began as arguments, tantrums, crying and non-compliance with rules. Moreover, upon transitioning to a different school (due to a family move) we began to experience more aggression, anger, avoidance of work, attempting to leave school campus, defiance, fixations and verbal threats.

A: We received phone calls about twice a week regarding Noah’s problematic behaviors. Additionally, within the first 30 days of school Noah had already received at least 5 days of OSS, several days of off team suspension, and sent home early at least 3 times. My husband and I had attended 3 IEP meetings/conferences, visited the school several times throughout the week, in hopes of Noah doing well for the day.

Overwhelmed…..was the only word I could use to describe it. My husband found himself frustrated with the school system.

Sometimes I was angry at the world because I thought no one saw the Noah I knew; however, other times I was angry at myself. The anger was a result of not knowing how to help my child. I could hear Noah’s silent cry, and his fear, but I thought all options were exhausted for more supportive services.

Over the next 45 days Noah’s behaviors escalated; which presented more challenges for Noah, his teachers and our family. Noah had gained an additional 4 ½ days of OSS, the IEP team was meeting more frequently, an additional psychological report was being done, and we sought private assistance for Noah.

By this point we all were frustrated, exhausted, and probably hopeless. We began keeping Noah home just to avoid the phone calls and suspensions.

Noah’s meltdown was challenging for both his teachers and us. For a moment it felt as though everything in the world stopped….and Noah was finally visible.

Noah’s team of teachers could now hear the silent cry that I heard.  It was a milestone moment for me…I began to embrace that others could possibly care about Noah too and with the school and our home working together there could be hope for Noah.

Q: What changed the playing field at that IEP meeting? Was it your idea to provide training, or did the idea blossom out of the discussions….

A: The IEP meetings began to change…….or became more specific for Noah and his teachers. The IEP meetings no longer focused on our opinions about Noah’s current behaviors, but the data that described the behaviors, the reason for the behaviors, and teaching Noah replacement behaviors. This was achieved with an FBA,(Functional Behavior Assessment) the assistance of a behavior analyst, and consistent data collection and review.

The first initial IEP meeting was five hours. We ALL wanted the best educational plan for Noah, his team of teachers wanted to understand how Noah’s disability impact his academics in their class, and my husband and I wanted to learn how we could support the school in their efforts to ensure Noah’s appropriate education.  This was the first recognition that as parents we knew our child best, but the teachers knew how Noah learned the best.

Everyone agreed that Noah’s behaviors required additional training for those that were/ will be members of Noah’s educational team. Over the next 30 days Noah’s behavior began to decrease and the teachers could begin to focus primarily on Noah’s academics and not behaviors. Moreover, my husband and I felt more of a collaboration with the school.

What was once a nightmare had now become a joy…..IEP meetings and school visits. The entire IEP team was delighted to come together and see the data charts; which displayed decreases in behaviors and increases in replacement behaviors. By the end of the school year, Noah had no additional days of OSS, he was smiling and hugging more, he enjoyed attending school, and both his teachers and his parents had learned the importance of training, support, and collaboration.

My family is forever grateful for the team of teachers at Sue Reynolds Elementary. Though presented with many challenges, the team overcame every challenge. The IEP team laughed together and cried together; but most of all, we all grew together.

This is not my story, rather, it is my journey as a parent of a child with Asperger’s. A story has an ending, but a journey has a path with pebbles and milestones along the way. As a parent of a child with a disability I’m not sure where the path leads Noah, my family, or those that come in contact with Noah. I accept the pebbles (challenges) that may be demonstrated on the path and I enjoy and reflect on the milestones (accomplishments) that are present.

No one ever remembers to pack everything in the suitcase for the journey.  Therefore, as a parent I never expect our IEP team to know everything; but rather I expect us to be willing to collaborate on all things.

Q: What resources did the IEP team (and school system) use?

A:The resources that were implemented in Noah’s IEP plan and were instrumental to developing his IEP were:

Q: Has his academic performance improved?

A: Noah’s academics improved tremendously at the end of last school year.  This current year Noah is in a special placement at Morgan Road Middle School. The IEP team have adopted the behavior goals and interventions from his IEP from 12-13 school year. This school year we are continuing to adjust instructional methods and the environment for Noah due to the transition to middle school. He began with all general education classes 1st semester, but we are in the process now of considering pulling him back in for 1-2 resource classes due to the over stimulation of his environment. The team will make the final decision at an upcoming IEP meeting.

Q: Why do you think that the one meltdown spurred the change?

A: I believe the meltdown Noah experienced spurred a change for the  IEP team (including my family)because it was no longer a parent’s concern for help, but now a child’s visible, loud cry for help.  As a team we knew Noah needed more supportive services, but we didn’t exactly know what was needed or why the services would be best because of the subtleties of Asperger’s Syndrome.

Noah was very intelligent and could fit in just like the other students; however his temperament was more elevated. When Noah had the meltdown it was very different from the normal temperamental tantrums and fixations. In other words…we couldn’t provide services for what we could not see. Once we were able to see (the meltdown) we could begin prevention of another meltdown.

Q:What advice do you have for other parents?

A:Progress cannot exist for a child without parents and teachers working together. When you think about IEP remember to Involving EVERYONE for Progress….we want to see our child(ren) progress. This is a journey, so bring others along too. Teachers know how our children learn best, but as parents we know our children; therefore collaboration of school and home provides an opportunity of success for our children.

Q: As an administrator/educator trying to resolve an issue like this with a student, what did you learn or are learning?

A: I was appointed the new principal at the school the week prior to Noah’s big meltdown.  I was surprised to learn he had so many suspensions on his record and that his behaviors were not addressed through the IEP.  I was also surprised to learn Noah was being served only for speech, since his Asperger’s and our reaction to him was directly impacting his behaviors.

I learned quickly that all adults involved needed immediate intervention strategies. I was pleased with the support our school district provided and the collaboration involved in rethinking how we were educating Noah.

Noah taught us that if we provide specific and targeted intervention, consistently and faithfully monitor the outcomes of our efforts, and stick to the plan with fidelity- children can learn what we need them to learn.  Noah was the biggest teacher on the team!

Q: Do you think you/ school has changed the way discipline is handled because of what has been learned through this experience or training?

A:Absolutely YES!  We have all learned to trust the FBA findings, to carefully analyze the cause and benefit of behaviors, to monitor progress, and to alter plans as the data drives our decisions.  Any behavior that takes instructional time away from a student deserves a closer look.  It is seldom wise to address the behavior in isolation.  It is the cause and/or effect of the behavior that we must address.

Q:What advice do you have for other administrators/ teachers?

A:Listen to the children and parents.  Ms. Kelly handled Noah much better than we did at school, so I watched her closely.  I learned the strategies she used to help him calm down, to make him feel heard and understood, etc.  I used those same strategies and learned I could have a similar impact when he was feeling stress or anxiety.  Ms. Kelly taught me to give Noah a time for his response and stick to the time.  She taught me how to respond, what words to say back to him, and when to allow him to have follow-up conversation.  I do not think Ms. Kelly realized I was studying her, but I was.  The outside training provided by our school district in combination with Ms. Kelly’s support allowed us (and especially me) to accept Noah for who he was and to encourage him to be all he could become.

Information about FBAs and BIPs

Fact sheet from the Ga. Dept. of Education