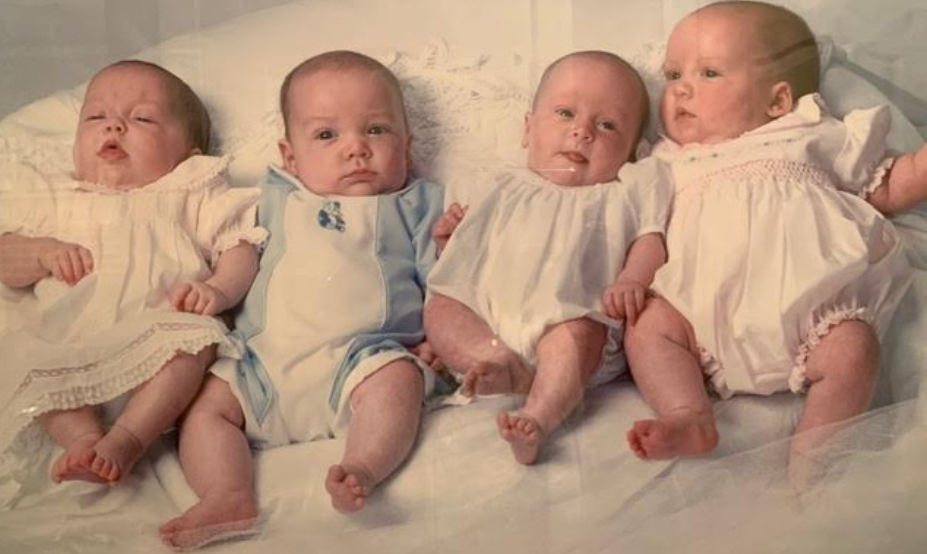 Sixteen years ago, I was a teacher, married and very pregnant with 4 babies at the same time.  I’d spent the last two or three years running between fertility specialists and work. Until that point my exposure to the special needs community was very limited.  Even as a teacher I rarely saw students with moderate to severe disabilities. Carrying quadruplets put me in a separate orbit from all the other mothers and moms-to-be.  I knew my babies would be preemies. Knowing my chances of having a child with a significant disability were high, I began to prepare myself mentally for that possibility long before their early birth at 31 weeks.

April 8th 2003 at midnight my four tiny babies were delivered by c- section at a hospital in Atlanta. Girl, girl, boy, girl.  They weighed 3 lbs and some change, except one. My daughter Pauli was a micro preemie at 2 lbs 4 oz. I met her in an incubator the day after she was born.  Her arm was so small you could slide my husband’s wedding band over it. The neonatologist said micro preemies often have developmental delays and learning disabilities.  I filed that away but kept a close eye on her.

Having a house full of same age siblings made it easier to spot at a very early age.  The quads each had different personalities and being fraternal they also looked very different.

It didn’t occur to me that it might be Autism and certainly not severe Autism.

For a time, Pauli met all the milestones on target for her adjusted age.  It wasn’t until 9 months that I started to worry. I’m sure the pediatricians thought I was a nervous new mother. I mentioned there was something different happening with Pauli but they said, “no worries they are all fine.”  I could see the differences daily. Pauli became obsessed with flipping pages of books. She sat and rocked by herself. She no longer looked at me or even sought me out when I sat nearby on the floor.

Finally, the doctor gave me a referral for an evaluation with the Babies Can’t Wait program. On my daughter’s chart the pediatrician noted, “At the mother’s insistence” because she didn’t agree.  I am proud I followed my intuition and overroad my discomfort of disagreeing with a doctor. Had I waited, several years would pass before my daughter started receiving services.  Being a multiple has obviously benefitted Pauli’s life. The surprise is in how much my typical or neurotypical kids have benefitted from having her as a sister.

Disabilities such as autism caused my children to look at life differently.  Instead of focusing on what’s next, achieving goals and preparing for college, having a sibling with special needs taught them to look for ways to make Pauli’s’s life easier, happier or more independent.  They learned to think of others at an earlier age. Children are naturally ego-centric. However, typical siblings learn empathy, patience and the joy of meeting small milestones as they watch their sibling progress.  They learn that life wasn’t all about them. Having a same age sibling next to them who struggles with the simplest of tasks taught them that we are not all given the same abilities. There is no rule in the universe that says we have the right to a brain that functions in a typical manner.  Life can be unfair and we should not take for granted the ability to walk, talk, eat and breath on our own.

2. Help others who don’t have your abilities.

It’s difficult for a teenager to justify whining about not having a certain phone or car when they look next to them and see a sister or brother who will never drive a car. Through the years my children have developed maturity, empathy, helpfulness and the ability to see people as people regardless of how they look or what they are capable of.

On the other side of the coin there are negatives.  Jealousy of the attention the special needs sibling gets from parents, guilt for the typical siblings watching their sister or brother struggle to walk, talk or control themselves in public, embarrassment and guilt because of the embarrassment.  I remember many times leaving a store or restaurant due to my daughter’s melt downs.

People stare when a child is screaming but they don’t realize we see them staring. It takes a minute for the audience to register that they are seeing a special needs child whose environment is not functioning in a way that makes them comfortable and they are expressing that discomfort.  They see a child they assume is spoiled or parents who can’t control them.

What I’ve told my kids is we have two options when this happens:

1.  Don’t make eye contact, we go about our business without worrying about how things look to outsiders.  It simply doesn’t matter and 99% of the time people will stay out of your way or get distracted by something else.

2. Alternatively, make eye contact, smile and wave.  The older Pauli gets, the more I’ve chosen the latter.  When we are in church and Pauli makes a loud noise and I see someone blatantly staring at her I simply stare back until they notice and then smile and wave.  It accomplishes a couple things. They realize they are staring and it establishes the fact that we are human. It’s harder to judge someone when you’ve made a connection with them.  If you do this when a child stares they usually smile and wave back. When it’s an adult they tend to get embarrassed and turn away but my goal is achieved either way!

Autism or not, multiples are a joy.  Many parents of multiples struggled with fertility issues, giving them a different perspective.  They are thankful to have children at all. One day my teenagers will be gone from the nest, out creating a life for themselves but that connection to their sister will never fade.  Pauli will be a part of their visits home and they will teach their own children, by their loving interactions with their sister, that people of different abilities are loved, important and part of our world.  It is my dream that this will be how we change to a culture of acceptance and inclusion for people with special needs. Just like charity it begins at home.

Here are some suggested resources: