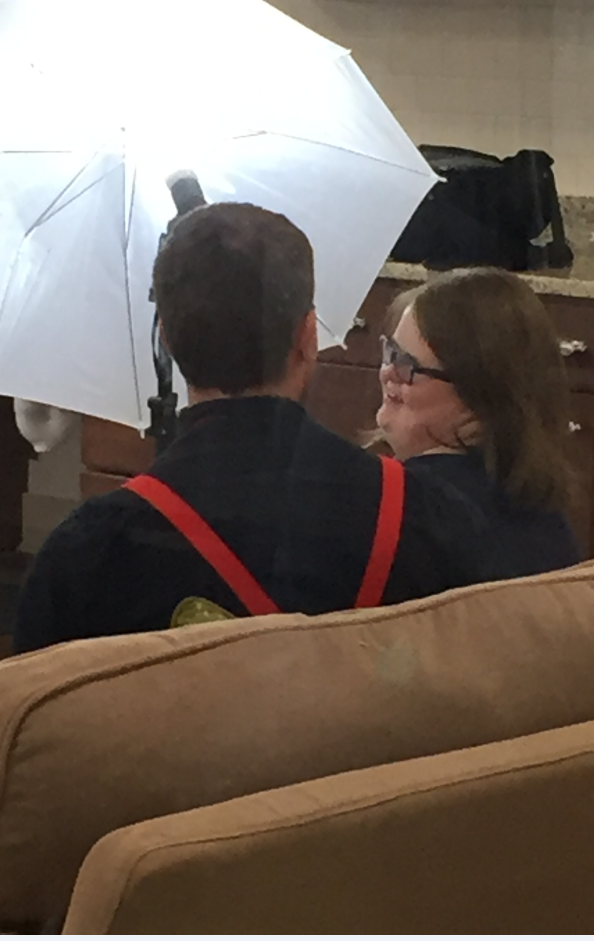 Oconee County Parent Mentor Amy McCollum shares her story about her daughter Hallie’s opportunity to do her own advocacy. Hallie’s name was offered to Chris Ulmer, a former special education teacher, who travels around the world bringing young people’s stories to Facebook hoping to promote better understanding of people with disabilities and inclusion through his foundation and the Special Books for Special Kids page.

Sometimes parents have to stand back and give kids the chance to step into the spotlight on their own.  This was one of those times and Amy took a moment to reflect on the experience.

Q. How did you first find out about Chris and the work he is doing?

I think I may have been following him since fairly early on in his experiences…several teacher friends would post his classroom videos, and I “liked” the Facebook page then

Q. How did the interview with SBSK evolve?

A staff member at ESP (Extra Special People), a nonprofit here in Watkinsville that offers camps, afterschool classes, and social activities and events for kiddos with disabilities, knew about Chris and his SBSK project and contacted him through Facebook.  Chris was going to be in the Atlanta area and wanted to film, so ESP offered to set up interviews with him on Wednesday Dec. 7.  The ESP folks called me on Monday of that week and asked if I’d be interested in Hallie participating – and I had a total “fan girl” moment on the phone and yelled “wow that would be fantastic!” (I think Katarina, the ESP staff person, was laughing). Hallie is well known around ESP for her love of performing, so I suppose they asked because they knew she would love the experience.

From the Special Books by Special Kids website: Founder and teacher, Chris Ulmer, began Special Books by Special Kids (SBSK) with the desire to share the unique talents and incredible personalities of the students in his special education classroom with others. He feared the isolation the neurodiverse community often faces would limit his student’s ability to meet their full potential and positively impact society. Without the backing of a publisher, what started as an idea for a book series became a multi-media movement. Ulmer, lovingly referred to as “Mr. Chris,” and Executive Director, Alyssa Porter, have dedicated their lives to this important work.

Q. Can you describe the process once your request for an interview happened?

ESP handled the logistics; they scheduled several interviews with ESP kiddos for the afternoon of December 7, at 30 minute intervals.  I actually wasn’t sure if I would be interviewed as well – in fact it didn’t even occur to me until Hallie and I pulled into the ESP parking lot.  At that point, I really hoped Chris would only interview Hallie and not me, because I had been to a Christmas luncheon and was wearing one of my gaudiest Christmas sweaters. HA. Chris had his camera and lights set up in one of the classrooms, and we watched through the window as he finished an interview with another student.  He then came out into the lobby and introduced himself to both of us, but then immediately focused on Hallie, explaining that they would be talking in front of a camera, and that there would be bright lights.  Then off they went!  I watched through the window but couldn’t hear the conversation…and I was a little nervous about what she would say!  Hallie was very smiley and giggly, she thought Chris was cute.  They talked for about 10 minutes, I took a few pictures, and that was it

He was very friendly, and I thought it was great that he focused on speaking with Hallie, treating her like the young adult that she is.

Q. How big is the crew that comes out? Can you describe how he puts these interviews together?

It was just him, with a camera and a couple of lights; they sat on a sofa to talk.  As I said, I couldn’t hear the conversation, but my impression was that the interview was very spontaneous, and simply based on what Hallie wanted to talk about.

Q.He seems to connect with his interview subjects so well, what did you notice when he was interviewing Hallie?

He spoke directly to her, made eye contact, and listened to what she said, and then asked further questions based on her responses; he’s a good interviewer!

Q. What did Hallie say about this experience?

Hallie enjoyed being on camera – she always does! – and her description of Chris was “He’s silly!”

Q. What do you think Hallie got from this experience?

It’s been so interesting, because there have been a lot of folks in our community who have come up to her and said they saw the interview.  Hallie has enjoyed reading the comments from the video, and I think she feels proud that so many folks have had so many kind things to say.

Q. Is there a lot of preparation with the “Special Kid” beforehand… it looks like he just does this interviews candidly and in the moment… but, the population he is dealing with, often does not respond well in those situations and while this might not be the case with Hallie, what did you learn about his process in working with people who typically do not have the best people skills….

There was virtually no preparation beforehand for us, but that may not be the case with others…Hallie’s interview was definitely “off the cuff”, and Chris based his questions on Hallie’s responses.

Q. Will you take anything from this experience and build it into the work you do as a parent mentor?

I think anyone who works with this group of people and their families can take notes on how Chris interacts with people – communicating openly and on their level, listening carefully, and responding authentically.

Q. What was the best thing that came out of this experience?

It was a fun opportunity for Hallie to shine, and for me to see her interact with someone who was basically a stranger, but she shared her dreams and had a great conversation!

Q. What, if anything, surprised you?

I was surprised that she seemed a bit reserved; Hallie is not usually shy when it comes to bursting into song, or busting a move!  It was neat to see in the comments on the video, though, that others recognized the songs she was singing and complimented her on it!