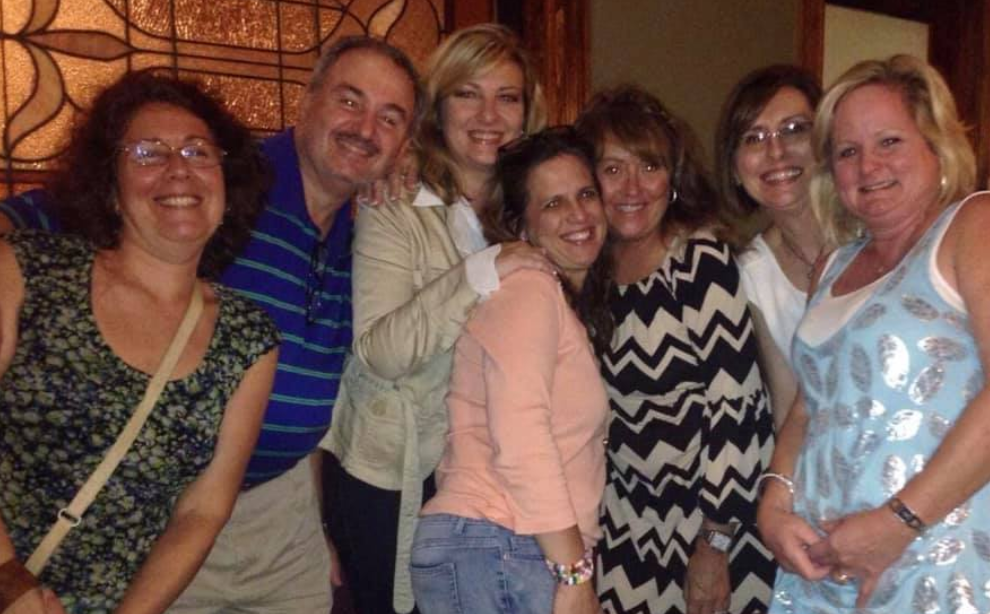 A Tribute to my Friend Scott Crain,

In Friendship and Love, Patti Solomon

At the start of an education training in the fall of 2002, I noticed a man, practically skipping into the conference room, and donning pink socks that perfectly matched his perfectly-ironed pink shirt.

Instantly, it was obvious to me that Scott Crain, the only male recruit for the GA Department of Education’s newly established Georgia Parent Mentor Partnership, GaPMP, was a man who didn’t lack self-confidence. Chatting excitedly to everyone at his table with a nonstop grin, he turned to me as I approached and said with a warm Southern charm, “Well, hello Sugar!”

I wasn’t sure how to take it at first but immediately spotted the laugher in his eyes and couldn’t help letting out a little giggle. “OK,” I soon thought. “This is going to be fun!

As the Family Engagement Specialist for the GA Department of Education, I was running the orientation for the new Georgia Parent Mentor Partnership. Scott was in our first official class of about 20 parents – all moms and a dad with a son or daughter with a disability, who now would each work for a school district to build family engagement, alongside the Special Education Director.

Surprise is an understatement when Scott a couple days later “mailed” me a typed letter requesting I come to a meeting with his Special Education Director, Assistance Director and their team. I quickly realized Scott didn’t know how to send emails or to use a computer. We laughed about it for years to come which was easy to do because he quickly became a master at emails and even helped develop our first website.

When I arrived at that particular meeting, Scott offered homemade muffins that, of course, he had baked that morning along with fresh coffee. Dr. Alice Murphy, the district Assistance Director, soon walked in and I greeted her with, “Hello Dr. Murphy.”  Scott quickly stepped up to greet Dr. Murphy as well, but instead said: “Good morning Sugar.”

He next outstretched his arms in a welcome to the room of female administrators and said:

In a time, when women with PhDs and leadership positions in education, were used to being met by their professional titles, Scott got away with just being himself. He was real. He was genuine. A true Southern gentleman. All who met him loved him.

For 18 years, Scott helped to grow and lead the GaPMP in Hall County throughout North Georgia and statewide with more than 100 Parent Mentors. He became an accomplished speaker and trainer; drove the Special Olympics Program in Hall County to a new level; calmed, guided and supporting thousands of families and educators: and helped to grow critical programs from Self-Led IEPS to Community C.A.F.E.s to Project Search and transition planning. He also won the prestigious Phil Pickens Leadership Award for his outstanding service to his school district and to districts across the state.

But most importantly, Scott was a true partner in building the GaPMP with his positive spirit and his willingness to always step up. With his friendly manner, snappy dress and unlimited energy, Scott never seemed to hit a road block nor did his enthusiasm in inspiring families to partner with educators and community partners to lead their children to better lives.

Scott truly believed in the strength of families, and his own family exemplified that strength with love and devotion.

I will never forget the gift the Crain family gave me when they allowed me to stay all night with them at the hospital as we kept a vigil for their son Will during his operation to receive a new liver. The day before Scott caught me as I left a meeting in Macon with a jubilant, relieved voice over the phone announcing the hospital finally had found a match. Throughout the next night, the Crain family and their pastor prayed as we stood holding hands in a circle until we finally were greeted with the good news of a successful transplant. It was an honor to be there at such a life defining moment but also to experience the rich spirituality this family came by with such clarity.

Many years later, Will took Pam Moore, a former Parent Mentor, Scott and me for a Christmas lunch. He insisted on using his own money to treat us. Will has become an amazing young man who won a gold medal at the World Special Olympics. Scott always beamed when talking about “Will Crain.” They were the best of buddies.

Scott was so very proud of their beautiful daughter, Claire, and her accomplishments as a nurse. How wonderful it is that he walked her down the aisle earlier this summer to wed her love, Brendon. And, his wife, Staci….well, she was the love of his life. Everyone could see that. They were the perfect combination! Scott adored her. Scott also was so loyal and loving to his wonderful parents who lived nearby. Several years ago I got off a boat on Lake Lanier and ran into the whole Crain clan eating ribs and BBQ chicken at a lakeside restaurant. It was always a party when you saw the Crains!

Scott’s loyalty to his church and to God is unmatched and he used his gorgeous voice to lead worship on most Sundays. He also honored us with songs at our conferences. He had us in all in tears as he beautifully sang Josh Grobin’s “You Raise me up” when the Partnership honored its founder, retired State Special Education Director Philip Pickens, who also died too young.

As serious as Scott was when it came to training parent mentor rookies and serving on the state council, Scott was always the first Parent Mentor to volunteer be in a skit dressing up as a special educator director or a confused parent. His love for life was contagious.

I deeply regret now that I haven’t see Scott for a while except for an occasional text message. It is true…life is short. Scott leaves an amazing legacy that will continue to fill my heart and many others for many years to come.

But, the real memories are with the Crains who will cherish the wonderful memories but, for now, suffer deeply with the pain of his great loss. I just hope our stories and love from family, friends and from around the state will be some comfort in the difficult days ahead. We will all miss you dear friend!

Back in the early 2000s, I met Scott while working on a grant to promote self-determination among high school students with disabilities.  He was a champion of person-centered planning and a visionary for student led IEPs.

A couple years later, our paths crossed again when I became a parent mentor in a neighboring district.  Scott was the Chairperson for the GaPMP leadership council and so he came to our office to welcome me and my partner, Jackie McNair.  That is when a deep friendship began as we laughed and shared.  He showed Jackie and me the ropes that day and continued to be our greatest supporter. Coincidently, all three of us had two children each, the same ages, so over the years we swapped tips and ideas as we navigated the teenage years, disability issues, and the work of supporting families.  I cannot recount all the fun times and meals we shared, all while deepening our work with families.

As another mentor said, Scott was our go-to-guy.  He was always the first to volunteer and then would take on a leadership role.  I never saw him angry, except one time and he was coming to my defense as he witnessed an ugly confrontation “Sugar, that made me so mad!”.

Scott was a loyal friend, kindhearted, and had genuine joie de vivre.  He loved his wife Staci and was so proud of Claire and Will.  He and Staci raised two wonderful adults.  He explored every resource and opened every door for his children and led other families along the way.  What an imprint Scott has had on my life, the GAPMP and his community.

Though he left the world too soon, he left it a better place. As I move forward in life and work, I aspire to be more like Scott.

Editor’s note: Anne Ladd is a Family Engagement Specialist at the Georgia Department of Education, she took over the role as leader of the GaPMP when Patti Solomon retired.