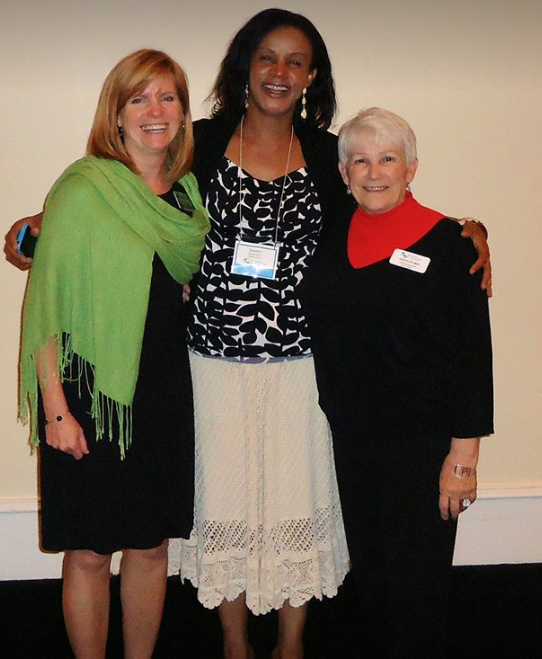 Stacey Ramirez may have left the Georgia Parent Mentor Partnership more than a decade ago, but she will be the first to admit that the disabilities advocacy work she does today is strongly informed and influenced by her experiences as a parent mentor.

“I had the honor of becoming a parent mentor back in 2003, the second year of the partnership, in Cobb County with Ijeoma Ajoku  and Judith Steuber,” Ramirez shared.

Ramirez learned some of her major lessons in the work of advocacy from the parent trainings she helped organize in Cobb. “We held a dinner and dessert event that supported three activities at once: a family support group in one room, a sib shop down the hall, and art and crafts projects across the hall,” she remembered. She learned the rigors of program management and planning through her organization of marketing the meetings, piles of covered dishes, finding volunteers and participants who shared Ramirez’s vision of inclusion and then…helping the parents feel valued and heard while showing all the kids in a family (not just the ones with IEPs) a fun evening in addition to helping the other participants learn about disability through activities and trainings which modeled inclusion.

Those who know Ramirez (who have run marathons and slept on the Appalachian Trail in frigid temps – as well as those who have co-facilitated person-centered plans with her) remark on her enviable energy and bright, sunny, outlook. But, she says, a “Can-Do” attitude is not enough in this work.

“What I learned early on as a parent mentor is that those meetings were good and people who participated got a lot out of it, but when I left – the event ended. Now I know to establish a plan for evaluation and sustainability before beginning a project or program. If we are going to give energy into creating something powerful to support people with disabilities and their families, then give equal energy and thought into what is needed to make sure – first, the program is what the community wants, and second, what partnership is needed to keep it going,” she said.

While at DBHDD, she also served as the Health and Human Rights Coordinator to oversee the monitoring of support services for people in waiver services.  There, she worked helping individuals who had been moved from a group home because they had been harmed, but then, uprooted from their living conditions (sometimes due to a misunderstanding) and placed in another situation with very little support.  Sometimes individuals were moved several times. As the parent of a child with ASD, Ramirez understand the big picture of the well intentioned acts being carried out and was working to provide stability and transition for the individuals who were being moved into different housing. She was also working to help professionals in the field understand the process and supports they needed to provide were just as important as the intent of safe housing.

She worked in state systems for three years and then, Ramirez heard about an opening at Georgia State University in the Center for Leadership in Disability (CLD) with its newly-minted director, Dan Crimmins, Ph.D. “I didn’t know what I was getting into. It was a project director for a Resource Center,” she said.  She applied, but she is quite honest that she felt she did not have the appropriate educational credentials or qualifications.  The job description asked for a master’s level education with Ph.D. preferred.  However, like many parent mentors, Ramirez had the incentive; the future of her children and other’s with disabilities – the initiative, and the creativity, to apply anyway. With the knowledge gained as a parent mentor and in the state service system, she created a 300-page notebook with tabs which cross-walked existing projects, program and contacts across the state that could partner with each of the initiatives Crimmins had put forth as his work-plan for this position at CLD.

“I have learning disabilities and some things take a lot of energy and work for me,” she said. “A gift that has come from my “disability”, has been my ability to summarize large amounts of information into visual charts for easy access and understanding.  I used this to my advantage to show Dr Crimmins the great possibilities he could do with this funding in Georgia.  After all, he was a Ph.D. from New York – what could he possibly know about the needs of individuals with intellectual and developmental disabilities and their families here in Georgia?  He was looking for someone with a higher education for this position, but I wanted to be sure he knew our needs and used this funding wisely,” she said.

But, out of a field of applicants, Ramirez was chosen for the job.  She worked at CLD for 9 years.

In August of 2015, she became the State Director of The Arc Georgia and now has moved into a role where not only is she helping to teach about inclusion, sustainability and advocacy, but… she is working to help drive legislation. One of her first big projects was to assist in the introduction and passage of HB343 to change the wording of the Georgia code from “mental retardation” to “intellectual disability”.  She was also one of the organizers of the recent “Wings on Autism” event, sponsored by The Arc Georgia at Hartsfield. “We filled up in 3 days,” she said. I am working with Delta and the staff at Hartfield to expand this event,” she said.  Ramirez also travels around the state working with the 16 chapters https://ga.thearc.org/about/affiliate-chapters/   statewide to help them create sustainable programs and proudly support their work for the mission of the organization: to promote and protect the human rights of people with intellectual and developmental disabilities and actively supports their full inclusion and participation in the community throughout their lifetimes.

“I still cherish my work with parent mentors. They know how to do the hard work of bringing families together. In some ways, I am still organizing my support group/sib shop and arts and crafts meeting… just in a more sustainable, bigger scale,” she said.